Two Wendy Waldman albums – Which Way to Main Street (1982) and Letters Home (1987) – are back in print. Wendy Waldman, for those who don’t know, is one of the very best singer/songwriters, musicians, composers and so on to have emerged in the 1970s. Her first five albums, originally released on Warner Bros and made with a variety of brilliant producers (Charles Plotkin, Nik Venet, Mike Flicker and others), came out on CD a few years ago. 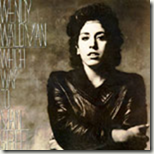 I wrote a negative review of Which Way To Main Street (originally released on Epic) for allmusic.com when I was barely post-adolescent. I wish I had listened properly. At the time, my ears were completely attuned to 1970s production styles and values, and I couldn’t get past WWTMS’s 80s approach and its harder, more strident sound. However, within a few months to a year, I began to shed my prejudices and I realised that the album was actually one of WW’s very best. I recall sitting at the piano and working out a piano accompaniment to the title track. The recording begins with a piano intro that recurs later in the song and as I began picking it out, I realised it was a thing of Sondheim-esque beauty and sophistication. I cannot recommend Which Way To Main Street enough. Wendy Waldman nearly always writes songs that contain a magic ingredient; something that transcends the confines of genres and styles. From the wonderfully taut opening number, ‘Heartbeat’, through to the dramatic ‘Time Like Your Wire Wheels’, WWTMS is a brilliant, bracing piece of work, available here.