Steven Grossman, who died in 1991, is not a name that one hears bandied about an awful lot. And yet he was the first openly gay artist signed to a major label (an accolade possibly shared with Jobriath – I’m never sure which one was first). His first album, the self-composed Caravan Tonight, appeared on Mercury Records in 1974. The persona he projects on the album tends to eschew glitz and glamour stereotypes, revealing an artist who is more like the gay counterpart of Cat Stevens or James Taylor. 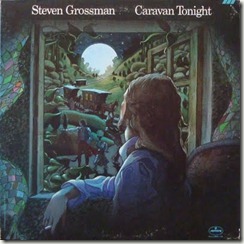 Earlier this year, Grossman’s second album finally emerged. Comprising songs that were composed over a number of years, but recorded during the singer’s final weeks in 1991, by which time he was ravaged by illness, Something in the Moonlight landed on my doorstep this morning. I’ll pop back here and add some more thoughts once I’ve listened to it.

I’ve always admired the sheer bravery of both Grossman and Jobriath in standing up publically in the early seventies. They were not donning homosexuality as a coy marketing gimmick in the manner of, say, David Bowie or Marc Bolan (the former of whom tastelessly went on record to out himself as ‘straight’ once AIDS hit the headlines). There was also an admirable gorgeousness about Grossman and Jobriath – the first had an artless, hippie look, while the second was dolled up and more brazenly sexual.

Find out more about Steven Grossman at: