For many, many months I’ve been meaning to write about Harriet Schock and her most recent album. A quick preamble: I first spotted Harriet’s name on an album by a vocalist of whom I’m not particularly fond. I find said vocalist’s singing style quite mannered, unsubtle and Vegas-y. I cannot, however, fault her song selection which has led me to discover brilliant writer-musicians including Pamela Polland, Marie Cain, Holly Near and…Harriet Schock. Back in 1998, I spotted Harriet’s early work in a second-hand outlet in Notting Hill (she recorded three albums in the 1970s for 20th Century records) and fell permanently for this piano-playing singer/songwriter with an intellectual twist. I’m not alone – her songs have been interpreted by Smokey Robinson, Roberta Flack, the late Syreeta, and Helen Reddy. I have long regarded Harriet and her work as  amusing, engaging, highly talented and charmingly enigmatic. 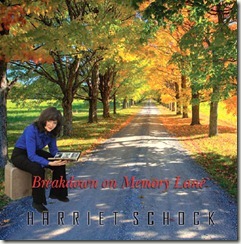 Breakdown on Memory Lane (wish I’d thought of that title) is everything that Harriet’s discerning followers, myself included, have come to expect from her. The songs and performances are as witty as they are elegant and leave one thinking, ‘I wish I were having dinner in a restaurant with this woman’ (and, in fact, I did do so in 2002). The predecessor to this album, 1999’s Rosebud, found Harriet writing songs based on classic 20th century cinema as well as scenes from her own life, merging them seamlessly into a thematic whole. The music was best described as an unusual kind of chamber-pop with occasional elements of country and folk. It was produced by the legendary Nik Venet, who oversaw much of the output of the recently deceased Dory Previn. Breakdown on Memory Lane is more conspicuously produced – it’s very much a pop record and its sonic glossiness brings to mind Harriet’s early work. It’s great to hear her sounding commercial without being commercially compromised.

As with Rosebud, the name of the album is not merely a reflection of the title track but serves to capture the qualities of the whole collection. On “When You Were Mine” Harriet sings about a platonic rapprochement with her ex-husband. “Don’t Say” is written from the viewpoint of a fan who can’t bear to think that the object of her affection is gay and urges him vehemently to stay in the closet so that she can continue to fantasise unhindered. The amusing “Sound Check Song” is required listening for anyone who has ever endured the experience of singing live publically.

Every Harriet Schock album has at least one out-and-out show-stopper. It’s the moment when you stop what you’re doing and succumb to an overpowering kind of musical vortex. “It Tears At Me” is possibly the only pop song to feature the noun ‘abstention’ as well as being an absolute humdinger of a ballad. It’s very beautifully constructed, deftly avoiding the soap-operatic melodrama of standard power ballads. I particularly love the sense of tension and resolution that it achieves through its use of ‘fourths’ in both the piano accompaniment and the vocal harmonising in the refrain.

I have always admired Harriet’s ability to write songs anchored in real life. The kind of love songs that I liked in pre-adolescence – Diane Warren ballads, for example – I grew quickly disenchanted with upon realising that they had nothing to do with real relationships or genuine experience or artistic self-disclosure. Harriet, on the other hand, is a songwriter with an unflinching commitment to reality and an ability to find the magical and dramatic moments that help us transcend its confines.

You can hear Breakdown on Memory Lane here, and you can buy it here. It’s also available at Amazon and iTunes.

Killing her Softly – the Trials and Triumphs of Lori Lieberman