A bit slow on the uptake here, but I was in hospital after all. Shelagh McDonald, the singer/songwriter whose albums came out in the early 70s, then apparently vanished from the face of the earth for over thirty years. I wrote about her in 2005 and – not longer afterwards – she reappeared only to go under the radar again. Far from being dead, she’d dropped out after a traumatising experience with hallucinogens and latterly been living in a tent in the wilderness with her boyfriend. Now she is properly back, singing and playing in territories including London. Since my original article no longer appears on The Independent’s website, I have posted it here. Click here for Shelagh’s own website. And there’s also an in-depth 2012 interview with Shelagh here.

Meanwhile, here is my 2005 feature. Of course, I’d have written it differently today. Shelagh’s piano, guitar and song-writing approach share more with Joni Mitchell (Blue era) than Sandy Denny. And compositions such as ‘Ophelia’s Song’ are not comparable to either but demonstrate that Shelagh was forging her own style. 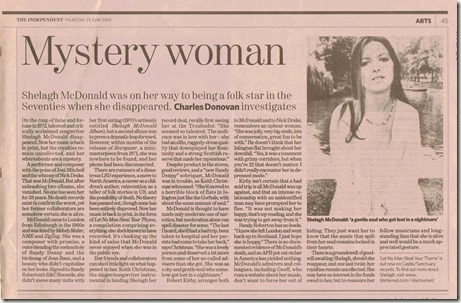