Sigh… there’s so much I could say about a brilliant album, in some ways typical of the first singer/songwriter era and in some ways quite different – The Rain Book by Renee Armand. It’s been a favourite of mine since I first heard it about ten years ago. It’s an unclaimed treasure on the beach of recorded music and I can’t recommend it enough. I spoke to Renee for Shindig! in 2018. 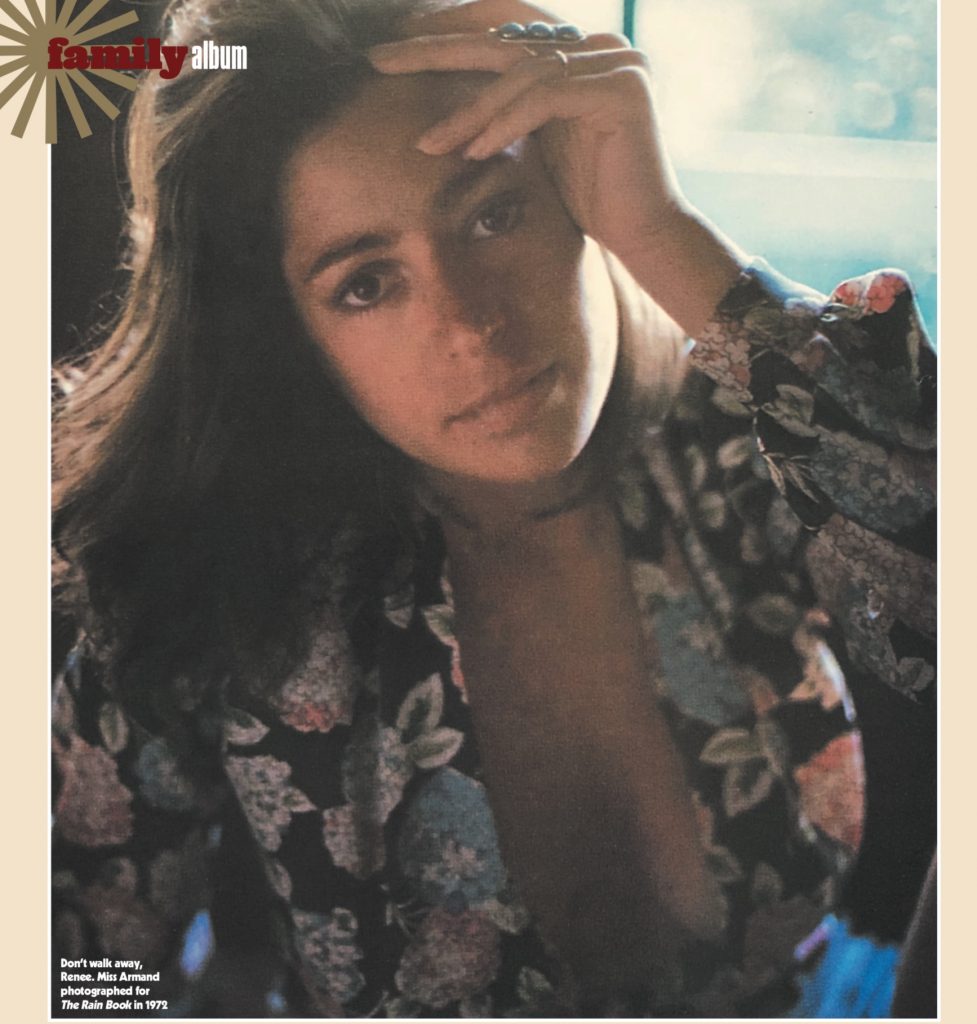 Renee Armand may lack name-recognition commensurate with her talents, but her songs have been recorded by Cass Elliot (‘Does Anybody Love You’), Michael Jackson (‘One Day In Your Life’), and Hoyt Anton (‘Boney Fingers’). Her most exceptional artistic statement, however, is one that’s been largely disregarded – her unjustly overlooked solo album, The Rain Book (1972, A&M).

By the early 1970s, Carole King had established the template for the singer/songwriter blockbuster. Competing labels wanted a slice of the action. As well as signing the Jeff Barry-produced Cheryl Dilcher, A&M took on Armand, already an experienced session singer. When her album was turned in, it became clear that they’d ended up with something stranger, better (if only they’d known it) and more subtly subversive than they’d bargained for. “They wanted a hybrid of Carole King and Barbra Streisand,” Armand confirms. “They got an outlaw, before outlaws were marketable.”

Armand had grown up no stranger to adverse circumstances. After her birth, she was taken to a Hollywood hotel. “Old vaudevillians died in the lobby there,” she recalls. “I ate, lived, was rocked to sleep on Hollywood Boulevard, in restaurants and movie theatres…a horrible life.” By her twenties, she was singing in Woody Herman’s band in Las Vegas, a gig which helped her break into the world of jingles.

A year before The Rain Book, she was recording a Busch Beer commercial at A&M Studio B when a publisher from Irving/Almo came by. “He asked me if I wrote songs. I didn’t, but I wrote poetry, and he put me with Kerry Chater, a staff writer. We met two weeks later.” The pair’s first song was recorded by Skylark, a soft-rock group on Capitol, including future industry legend, David Foster. “Kerry was incredibly kind – the perfect co-writer for someone like me – because he let me say anything in a lyric, so I wrote and wrote, and some of the stuff was pitched and sold to other artists, but every one was intensely personal.”

Crafted principally at Clover Recorders in Hollywood, Armand’s album got off to a shaky start with producer Barry De Vorzon, whom she regarded as “straight and standard-type”. Her cast of musicians, however, was of the very finest and included drummer Jim Gordon (whose shocking story is well-documented) with whom Armand was in tumultuous love. Ultimately, The Rain Book would be a permanent record of two relationships; her marriage to the wild Gordon (“a thing that turned everything else to ashes”) and her deep, platonic connection to Kerry Chater (“the dearest, most intimate friendship”). It would be an album replete with grizzly descriptions of narcotic misadventure leavened by Arcadian detours through romance and nature. First, though, De Vorzon had to go. “I fired him because everything was big production and Vegas-y, and hired Jim,” Armand recalls. “Jim and I spent our time together falling and falling, living and working in a private blissful hell. Crashing a lot. We just wrote and played together, slept, ate, worked. Lost all time. His metabolism, his energy and craziness were overwhelming. Songs came out of it. Kerry did what he could to help me remember the real world. Nothing mattered but the life with Jim and the music with him.”

The Rain Book had a mood-palette of tenderness, ardour, despondence and grief. “It was about love and loss, despair and loneliness. And there is something about being from So Cal. It’s a desert. Rain is rare. Fires come every year and burn mountains down, and then when the rain comes, if it comes too hard, it destroys everything left. And still, we beg for rain so things won’t die, so things can grow.”

This idea – of things flourishing, being razed by passion, drenched, then flourishing again – captures The Rain Book perfectly. To the untrained ear, ‘England’ (Armand/Gordon), with its meandering flute motif, sounds like gentle folk-rock. Those actually listening will hear the lines, ‘I heard the northern coast is cold and hard/The same as the bathroom floor but not the same’ and wonder what’s really happening. Armand explains, “It’s about almost dying on a trip to England. Drugs. At the LA house on the bathroom floor. Wanting us to not be like that. Knowing it was all impossible and it was. The last of my hope.” Armand’s trauma comes wrapped in a magnetic pop sensibility. The song has hooks to spare, using them in the verse, the chorus and in a yearning post-chorus that simply repeats ‘If we can get away…if we can get away’.

‘Elizabeth Rain’ is a reverie, written by Armand alone, in which she envisages herself a new mother, carrying her infant through an Aspen snowscape and into an aestival riverside walk. It’s a confection for which words like pulchritude exist, a ballad with an extravagant melody that allows Armand’s voice, supple, bell-like, jazzy in its reach and phrasing, to stretch. By now, it’s apparent that the album has a restless, capricious temperament. The sad listlessness of ‘I Think You’re Letting Me Go’ morphs into the good-humoured pop of ‘Does Anybody Love You’, before the rivetingly dismal ‘Friends’. Not only is ‘Friends’ written with Kerry Chater, its lyric – a blunt admission of nihilistic drug-taking – addresses him. Chater is the friend attempting to intervene but being implored to go away: ‘Oh my blind friend/I love that needle in my arm…I hate to hurt you/But I have to do this to myself’. “Me to Kerry,” Armand remarks. “He did what he could.”

After ‘You & I’, a dream of a normal life, there’s an Elizabethan pastoral ballad in 6/8 time, ‘Falling Ladies’, a Shakespearean courtly dance with strings. “It’s before-the-fall innocent,” says Armand. The effect is spine-tingling. The album’s lead single, ‘Raining In L.A.’, gripping and catchy to a fault, is like the more fretful sibling of ‘Does Anybody Love You’. Perhaps the only track fulfilling A&M’s Streisand expectations is ‘I’m Going Away’ (Chater/Armand), a searing epitaph for love and a huge production number with a thunderous Roger Kellaway orchestral arrangement, bringing The Rain Book to a blazing finish.

The album was presented with an illustrated cover, an Ed Ruscha homage with Armand’s name in embossed raindrops. On the reverse, a portrait with an Art Deco border emphasises her physical beauty. “The back is all about the boobs,” she notes archly. “They were fixated on my breasts. I think it looks as though I’ve got a headache and am trying to be brave about it, and my breasts are more important.”

A&M withdrew promotion and the record sank. “I have always felt the album was, simply, real – awful but beautiful enough in its brokenness, and not Product. But Product was what you had to make. Product was everything or you were a failure. I was a failure. I was that record. I really was. It was a record of everything I was living, and it wasn’t good and it didn’t matter, so I wasn’t good, and I didn’t matter.”

Perhaps Armand has reconsidered that self-deprecating verdict. The Rain Book is more compelling, more captivating than many of 1972’s bestsellers. Following its fanfare-free release, her music career continued to bloom in a variety of ways. She sang on The Poseidon Adventure, cut another solo album, In Time, enjoyed medium-sized hits as part of the well-liked Coyote Sisters and toured with John Denver. Today, she lives on a farm outside Nashville, tending her animals. The Rain Book had a second life via limited-issue Japanese CD in the early 2000s. It richly deserves a third. 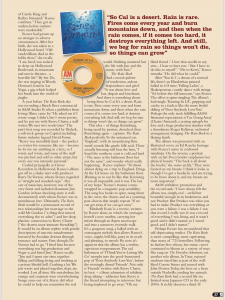