I first read about Wimbledon-raised Bridget St John at some point in the mid-1990s, when I was at Exeter University. The See For Miles label was reissuing some of her work, an event which triggered a few articles in the music press. It would be over ten years later that I finally heard Bridget’s music. Cherry Red had taken over the Dandelion catalogue (John Peel’s Dandelion label published Bridget’s first three albums) and they put out a series of well-presented reissues that have remained in print ever since. Bridget’s 1974 album for Chrysalis, Jumblequeen, was simultaneously reissued by the Hux label. It didn’t take long for the music to captivate me, especially Songs For The Gentle Man, which is perhaps Bridget’s most dazzling work. She has a singular style both as songwriter and vocalist and, given half a chance, her recordings will cast a quietly intense spell over you. Given that she’d long ago left London for New York, it never occurred to me that I’d a) see Bridget live and b) write about her, but both happened in fairly short order. In autumn, I went with Linda Thompson to Bridget’s gig at the wonderful Green Note venue in Camden (Bridget was on great form – everyone there was enthralled) and then, in January 2019, I wrote about her for RnR Magazine. Here is that piece. 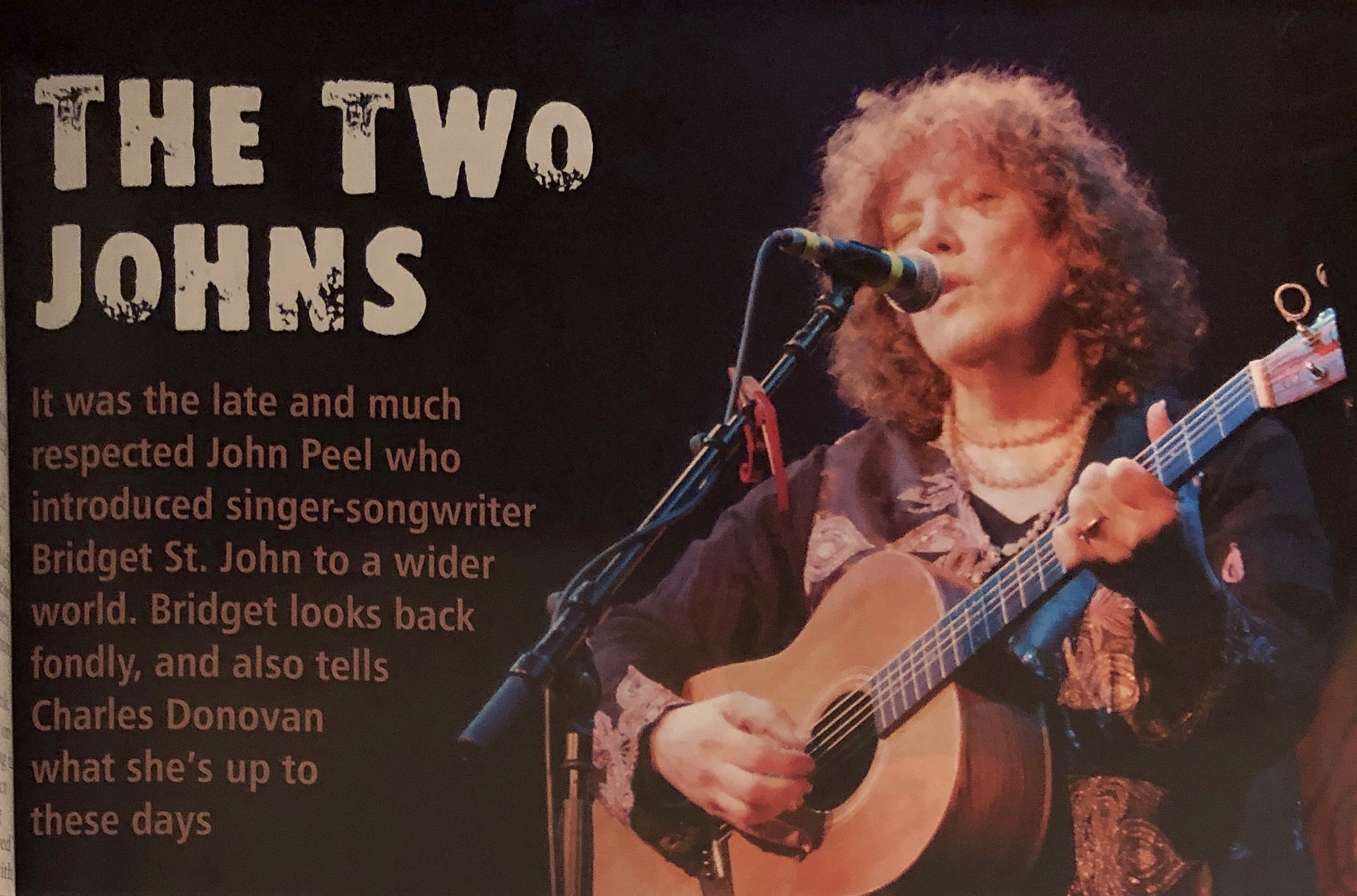 When Bridget St. John launched into Joni Mitchell’s Vietnam-era ‘The Fiddle And The Drum’ at the Green Note on 11th September, such a hush fell over the room that the proverbial pin drop would have sounded like an explosion. Songs from her much-loved run of albums, from Ask Me No Questions (Dandelion, 1969) through to Jumblequeen (Chrysalis, 1974), were in the set-list and Bridget tackled an entry from her odds-and-ends collection, Take The Fifth, and a more recent composition, ‘The Hole In You Heart’. She also delivered a sardonic rewrite of ‘America The Beautiful’. Having lived in Manhattan since the mid-1970s, she’s suitably placed to observe the changes that have affected the country for good and, in this case, ill.

When she first emerged into public life, the Wimbledon-raised singer/songwriter brought a thoughtfulness and a distinctive singing voice (like a less doom-laden Nico with a more accurate sense of pitch) to the British singer/songwriter scene. She was tall, with intense, Carly Simon-esque features and her taste for vintage fashions marked her out from the crowd. There was a simultaneous sophistication and guilelessness about her, immediately apparent from the first few bars of album-opener, ‘To B Without A Hitch’, with its brisk, scale-exercise melody and shifts of time signature and tempo. She had an original point of view and appeared to have no interest in fame, although she’d been recording herself at home, as if in preparation for what was to come. “When I was about sixteen, my father bought a Grundig reel-to-reel to practice his medical lectures; I remember recording myself singing Helen Shapiro songs. But I really had no knowledge of the business of music; I had no plan. I didn’t go to record companies trying to get a deal.”

It was through the intervention of one friend and benefactor that in-roads were forged. “John Peel played a pivotal role, not just in my recording career but in my performing career and in my life. My relationship with John was hugely important, and still is really. After meeting John, everything evolved very naturally, without a plan on my part at least. I consider myself totally fortunate that things unfolded for me the way they did, that John and Clive Selwood created Dandelion Records and that I was part of it”. Dandelion Records was formed in 1969, with Bridget’s Ask Me No Questions the company’s inaugural album release. John Peel’s fledgling label believed in total artistic freedom and, in stark contrast to the majors of the day, that record contracts should be advantageous for the artist. Among Bridget’s label-mates were singer/songwriters Beau, Kevin Coyne and Clifford T. Ward, Gene Vincent and, the company’s sole hitmakers, Medicine Head, who took ‘(And The ) Pictures In The Sky’ to the lower reaches of the Top Thirty in 1971.

Ask Me No Questions was an extremely well-recorded album, made with a small cast, and its title track remains a signature song for Bridget. “At the time, everything was new and unknown,” she says. “We recorded at Old Bond Street studios. I had done some gigs and radio and one TV show, so I had performed some of the songs. But, other than demos, I had no experience of recording.” It was perhaps owing to a combination of her lack of recording experience, the artistic freedom and support of Dandelion and the discipline of a tight budget that the album came out in such extraordinary form, free of artifice, self-consciousness and showbiz mannerisms; a folk treasure. “It is rare to be allowed to be yourself without judgement,” reflects Bridget, “and that’s due to the person John Peel was – artists on Dandelion were given the opportunity to grown into who they would become”.

“The album was done in two live sessions, so it absolutely represents who I was and how I played and sang at the time. I had three friends with me – John Martyn, Rick Sanders (not the Rick in Fairport) and Simon Stable (listed as Dominic for reasons he never explained to me!) I had no preconceptions of what a recording session should be. We didn’t rehearse beforehand and I don’t remember if there were multiple takes, but I think not very many. The most time and the most fun was spent on ‘Ask Me No Questions’. John Peel got so creative with that track – the birdsongs and church bells were all his idea and John Martyn’s guitar and harmony took the song to a special place for me, then and still.”

Dandelion didn’t stint on presentation. Each of Bridget’s releases for the label was presented in a lavishly illustrated gatefold, with the second, Songs For The Gentle Man, printed on luxury textured stock. It was Songs For The Gentle Man that most emphasised the pastoral qualities of Bridget’s music. John Peel stepped out of the producer’s chair to enable experimentalist Ron Geesin, who’d worked on Pink Floyd’s Atom Heart Mother, to step in. Bridget’s increasingly confident songs were given more window-dressing this time round, courtesy of Geesin’s butterfly-pretty arrangements for woodwind, strings and brass.

“Initially, Dandelion had arranged for Paul Samwell-Smith to produce the album,” says Bridget. Samwell-Smith had been working with Cat Stevens and would, that year, helm Carly Simon’s second album, Anticipation. “For whatever reasons, that did not happen,” Bridget continues. Fortunately, Geesin was at hand. “I had been doing some gigs on the same bill as Ron, and was friends with him and his family. It was a good experience full of surprises and moments of great joy. Ron had great ideas and unique approaches and it’s not like anything else, I think.”

As Bridget’s journey with Dandelion came to an end, she and her husband, Nigel Beresford (who occasionally wrote songs with her), moved to Manchester. “Nigel had finished a degree in Chinese at London University, but decided he wanted to be a doctor, so we moved north so he could attend medical school.” At this juncture, the marriage began to fail. “On a trip to Derbyshire, we had found a small cottage in a tiny village of Sparrowpit. When we split up, I moved into the cottage. That was a huge change for me – mostly because heat and hot water depended on being able to light a fire and keep it lit and I had never learned to do that before. It’s a beautiful county but quite bleak in winter and the village sits on a very steep hill which can be hard to navigate in snow and ice. I eventually adapted and grew to love it, and it was actually more conveniently located for travelling to gigs than London. I still visit when I can, and will get there twice on this tour”.

Bridget’s Sparrowpit sojourn inspired the sprightly opening track of her fourth album, Jumblequeen, for which she moved to Chrysalis Records. “Dandelion had been a very special label but the business of music requires that you be profitable and, as I understand it, whilst artistically admirable, Dandelion did not meet the profitability criteria. At Chrysalis, I stepped into a different world. For the first time, I became more aware that my work would be seen as product – not necessarily a bad thing but certainly different.” With Leo Lyons of Ten Years After as her producer, Bridget fashioned one of her finest albums, notable not just for its tribute to her Sparrowpit home, but also for elegiac songs about the end of her marriage, and a moving tribute to her grandmother, ‘Song For The Waterden Widow’. “Leo was very sensitive to me and my songs,” she says.

When Jumblequeen failed to achieve blockbuster sales, Bridget visited New York to see a boyfriend. On arrival, she discovered the relationship was not exclusive. “That was a bit challenging! I did have a couple of contact numbers for music people who were fans. Also, Stefan Grossman’s parents opened their home to me – a huge imposition given the limited space in New York apartments. Without their help I would probably have gone back to the UK. But I felt at home in New York in a way I had not in London. I knew I wanted to move there – for a while at least. And a while has turned into forty years!” By late 1978, Bridget found the apartment in Greenwich Village that remains her home to this day. In the 1980s, she had a daughter, Christy, and has stayed busy, not just in music. “I have done many things. For many years, I worked at Kenny’s Castaways [defunct Bleecker Street club], The Bitter End and The Cat Club, which is no longer. It is difficult to make enough money from music, so in New York I have supplemented my creative life with anything from waitressing, bartending, cooking, managing in night clubs, to cleaning houses at one point and latterly helping my elders and wisers as I like to call them. I organise whatever they need help with and I enjoy being useful and seem to be good at organising.”

Songwriting has never gone away, but Bridget’s post-Chrysalis product has been limited to Take The Fifth, a handsome collection of mainly-1970s recordings that saw the light of day in the 1990s, and some live releases. Since Cherry Red acquired the Dandelion catalogue, her music has been treated to an array of packages, featuring rarities, BBC recordings, b-sides and single versions. She has collaborated with Michael Chapman and is looking forward to doing more with Sarah Smout, who accompanies her on cello. “It does feel as though there is another album to come,” she says, promisingly. “But the business has changed and I think I would have to record an album and then figure out who might want to release it. I think the days are over when I could ask for an advance in order to record.”

In 2008, Bridget married Gordon Edwards, bass player and leader of Stuff, the New York jazz-funk band who recorded for Warner Bros in the 70s, which is when the two of them first met. She’s now in talks to set up her next Japanese tour. “I like to try to make the best of each day, to keep a good mind and to live as much as possible with gratitude. I can say for certain that when I wake up I will feed the cats, make a good strong cup of tea and eat a banana, but after that no two days are ever the same.”